Bestial Manifestations of Malevolence and Death 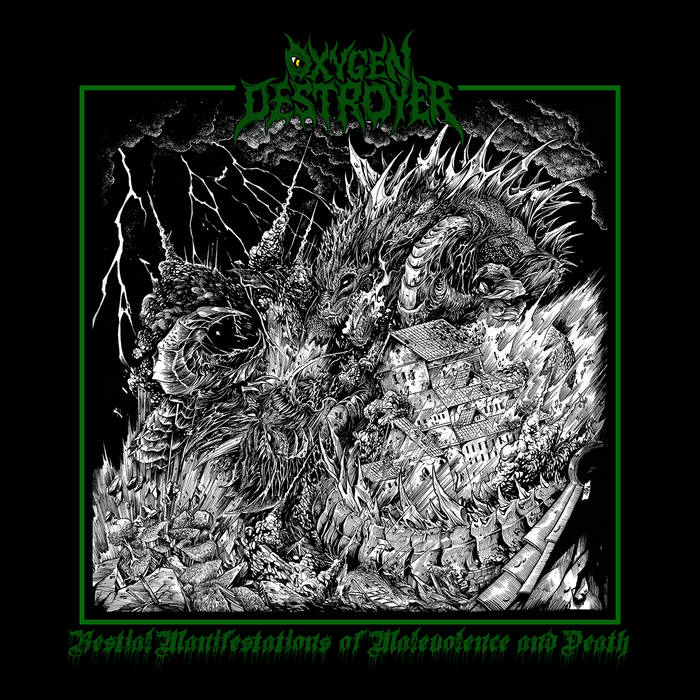 Gojira Blume Now listen, Godzilla is the man of my dreams; Oxygen Destroyer is a fucking nuts metal as it gets band name; imma kaiju air fight the hell out of these riffs. This is a go-to. Long live the king!

whatisthis8175 This album absolutely destroys like a Kaiju raging through a city.

"While often teased for their effects and for being ” cheesy,” many Kaiju movies like Godzilla ( 1954) and Rodan are actually very well made films that deal with themes involving nuclear warfare and the ignorance of mankind."
- Jordan Farrow, Oxygen Destroyer, quoted from an interview w/ Toilet of Hell

"They can all fly like the wind — a particularly gruesome, pestilential wind that roars at hurricane strength. The low-tuned, buzzing riffs have a distinctly poisonous sound, but get their hooks in your head; the shrieking solos are insane; the drumwork is jaw-dropping; and the vocals are utterly filthy and bestial. Hail the Oxygen Destroyer!"
- No Clean Singing
www.nocleansinging.com/2018/04/17/seen-and-heard-part-3-oxygen-destroyer-bestial-sight/

"...Kaiju thrashing maniacs Oxygen Destroyer dropped an atomic riff bomb on Metal City, bathing us in the warm radioactive glow of nuclear drums and flaming shrieks. The music on Bestial Manifestations of Malevolence and Death alone is enough to burn an instant purchase into your wallet, but the subject matter, giant monsters from cinematic history, launches the entire package to the top of the food chain. I reached out to guitarist/vocalist Jordan Farrow to give me the low-down on the nuclear titans that inspired each track. I’ll let the man, the myth, the monster take it from here...."
- Toilet ov Hell
www.toiletovhell.com/hail-the-kaiju-with-oxygen-destroyer/

"The album reminds me a little of The Crown, Necrodeath, Impious (what ever happened to them?) and of course, you’ll also hear some Sodom, early Bathory, Sarcofago, Nunslaughter, very early Melechesh and numerous others. Frontman Jordan Farrow also manages to keep the mood with a frightening rasp that sounds not too far from the some of the various sounds that I’ve heard erupting from these horrific beasts over the years. Drummer Chris Craven (Weaponlord, but I don’t think that their debut Hail The Victorious features any songs based on the game, which I find unfortunate) is also an integral part to band’s sound, as he manages to provide most of the firepower and I’ve no doubt will sound like a Kaiju on stage."
- The Grim Tower
thegrimtower.com/oxygen-destroyer-bestial-manifestations-of-deliverance-and-death-2018/


"Thrashy, heavy, obsessed with monsters - these are the things that we love in our death metal. Oxygen Destroyer are more than just another death metal band, they are a legion of rippers crafting undeniable riffs with a punch and raw anger that few of their peers match. The inherent silliness of referring to themselves as 'Brutal Thrashing Kaiju Metal' aside, Oxygen Destroyer represent an approach to death metal that is unrepentant and crushing. The high power attack and manic magic of Bestial Manifestations Of Malevolence And Death is nothing short of addictive."
- Two Guys Metal Reviews
www.twoguysmetalreviews.com/2018/06/oxygen-destroyer-bestial-manifestations.html


"The album is littered with samples from various big beast movies (and some equally nasty radio signals from Saturn). But the sound is more akin to blackened thrash/death, with just a dash of ORDER FROM CHAOS thrown in for good measure. The tracks are short, direct to the point and focused. It shreds at points, but its real trick lies in capturing the raw nastiness and savagery at the heart of every kaiju caper."
- Low Notes Music Blog
lownotesmusicblog.wordpress.com/2018/04/08/godzilla-metal-oxygen-destroyer-review/

"Oxygen Destroyer have created a true rager of a debut LP that will leave your neck in pieces by the time you’re done with it. In no small way, “Bestial Manifestations” is an astonishingly vicious record that just keeps on giving, one track after another in quick succession."
- Headbanger Reviews
headbangerreviews.wordpress.com/2018/04/06/oxygen-destroyer-bestial-manifestations-of-malevolence-and-death/

"Oxygen Destroyer finds their success in seamlessly transitioning between a continuous supply of death/thrash riffs. Imagine the ferocity of Morbid Saint turned a few notches higher to fit in with the death metal bands of the early 1990s, and you have something that resembles Oxygen Destroyer. While the ever-popular tremolo picked riffs are out in full force on this record, there are plenty of more brain-scrambling riffs that rely on switching between power chords with a barrage of 16th notes in between each movement on the fretboard."
- Skull Fracturing Metal
skullfracturingmetal.com/2018/04/oxygen-destroyer-bestial-manifestations-of-malevolence-and-death/

"With Bestial Manifestations of Malevolence and Death, Oxygen Destroyer have delivered an onslaught of unstoppable death/thrash, wantonly destroying everyone and everything in their path; without mercy or hesitation. This rampaging beast of an album will take your breath away! 8/10"
- Worship Metal
www.worshipmetal.com/reviews/oxygen-destroyer-bestial-manifestations-of-malevolence-and-death-album-review/

"Oxygen Destroyer has a terrific sense of pacing, fantastic face melting speed, and the musicianship to bring it all together makes the album astonishingly vicious beginning to end. If you love your Godzilla films and death/thrash metal, then Oxygen Destroyer fits right at home for you."
- Metal Purgatory
metalpurgatorymedia.wordpress.com/2018/06/04/oxygen-destroyer-bestial-manifestations-of-malevolence-and-death/

RECORDED LIVE 2017 at THE METALSMITHS, INC.
MIXED AND MASTERED by CODY J. BRUMLOW

Bandcamp Daily  your guide to the world of Bandcamp

Tasty gems from around the world, plus interviews with Kaitlyn Aurelia Smith and Nick Hakim.